are especially wonderful on sunny spring afternoons. These shots are from Long Beach in Centerville.
Piping plovers are on their nests and watching warily as people pass by. Horseshoe crabs are beginning to lay their eggs. Beach plum is nearing the end of its bloom while rosa rugosa is just beginning hers. Willets are nesting in area salt marshes and feeding along the edge.... 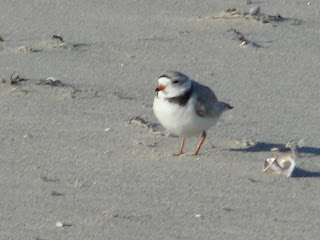 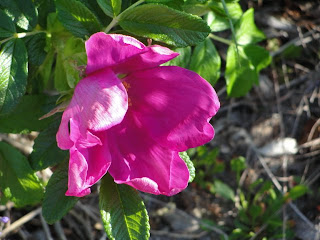 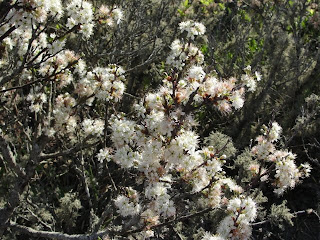 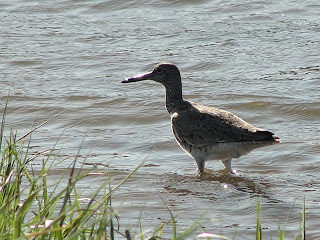 Every beach is busy now with birds and other animals either nesting or preparing to nest. It's a great time of year to go exploring before the summer crowds set in.
Posted by Mary Richmond at 5:50 AM No comments:

Canada Mayflower, also known as false lily of the valley, is just about to come into bloom. 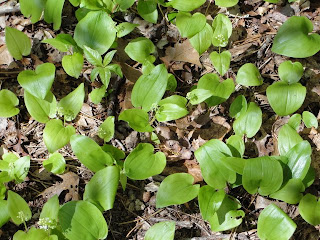 In the ponds, signs of the first water lilies and their blooms are just appearing. 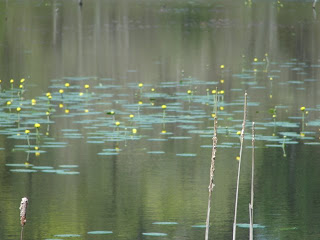 Sun streaming through still mostly leafless trees give light to the early bloomers on the forest floor. I love the soft green "mist" that seems to be everywhere as the tiny leaves that will become the cool shade of summer burst forth. 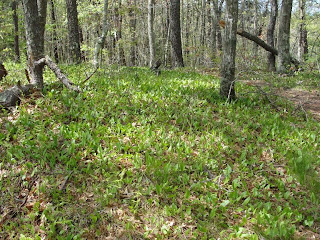 Each tiny leaf reaches to the sky, following the light and warmth of the sun. 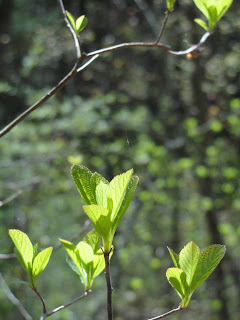 Spring on Cape Cod takes its sweet time getting here but when it arrives it is sweet indeed!
Posted by Mary Richmond at 2:57 PM 1 comment: 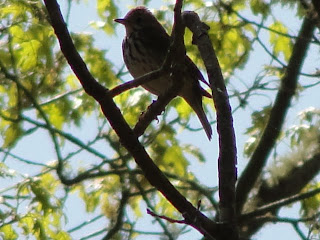 It was a beautiful morning for walking and I took a quick walk over at the Skunknet Conservation area between errands and got to try out my new camera! Ovenbirds were calling like crazy and I got this dark picture of one singing above by zooming way in and hoping for the best. I am really just trying to figure this new camera out but am very excited about the possibilities it seems to have for photographing all sorts of things on my nature walks.
I found my first lady slippers in bloom. 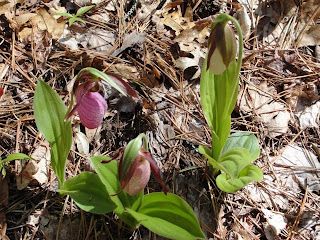 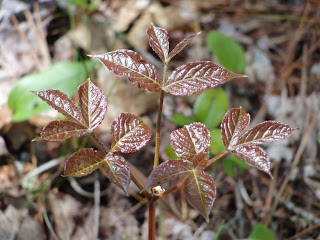 Also, sarsparilla is coming up all over. It looks very much like poison ivy at this stage but note the bracket of 3 branches. It also has a little flower ball coming up just underneath it in many cases. 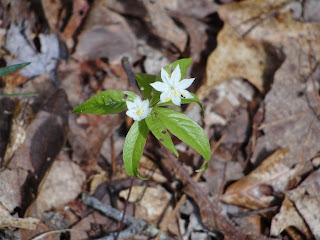 Starflowers are among my favorite spring flowers and they are just starting to bloom almost everywhere there's a sunny woodland floor. 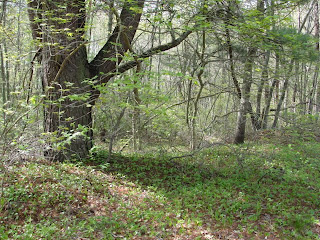 This big old white pine seems to be standing guard over this huge area of Canada mayflower and starflowers. In another few days they should all be in bloom. Once the leaves all fill out overhead the spring flowers of the sun dappled forest floor will fade away until it is time once again to announce that spring has arrived at last.
Posted by Mary Richmond at 1:13 PM No comments:

Snake in the Grass 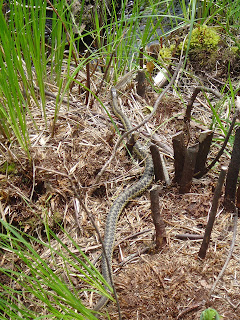 Some days you can look for a snake all day and not see one and others you can be thinking of anything but a snake and it will appear right in front of you like this one.
Garter snakes are very common snakes on most of Cape Cod but especially in the Upper Cape and Mid Cape areas. Many people refer to garter snakes as garden snakes or even gardener snakes. They may be found in your garden but they love to live near water where they can prey on small frogs and fish.
Garter snakes give birth to live young. We had several new born garter snakes at a nature center I worked for several years ago and we fed them earthworms at first. They may have been tiny snakes but there was nothing tiny about the way they hunted and attacked those worms. They were efficient and effective predators even then.
This garter snake was taking in the sun and watching the water's edge while I was photographing the baby swans.
There are no poisonous snakes on Cape Cod although some might give you a good bite if you grab them the wrong way.
Posted by Mary Richmond at 7:43 AM No comments: 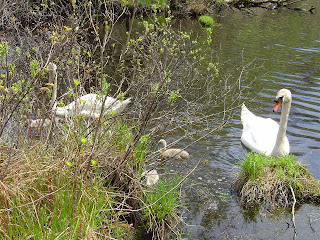 Look who had their babies this week! Baby ducks are called ducklings and baby geese are goslings. Do you know what baby swans are called? 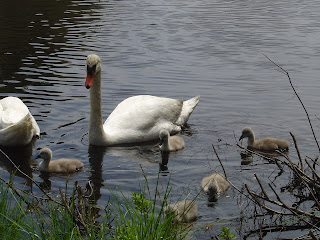 This lovely family is at the Smiling Pool at the Thornton Burgess Society in East Sandwich. Both the male and female swan look after the little ones. There are many predators in and around the pond that would love to eat a little swan for dinner so the parents are very protective. If a swan hisses or swims toward you, back away! A swan can break a man's arm if it is angry and close enough. These babies are so little that the parents are bringing them very close to shore to feed. Sometimes you'll see the parents pulling up greenery from the bottom so the little ones can feed on the surface. In another few weeks the little ones will be able to poke their heads and necks around under the water just like their parents but for now they need a little help.
The family is ready to move on now. 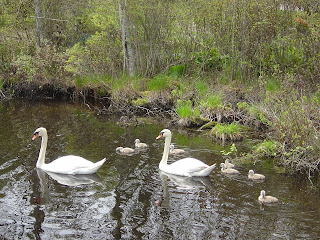 Posted by Mary Richmond at 2:38 PM No comments: 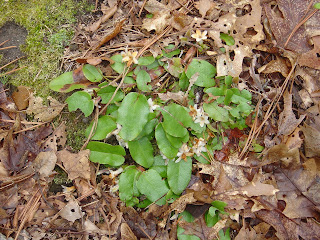 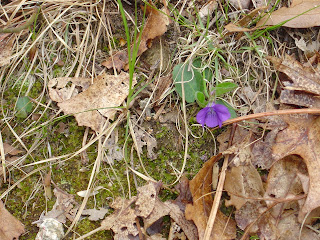 Mayflower or trailing arbutus is still flowering in most Cape locations. I also found this little wild violet on the side of the trail and thousands of leaves of the Canada mayflower or false lily of the valley, that will be in bloom over the next few weeks. These pictures were taken at Hathaway's Pond in Hyannis. 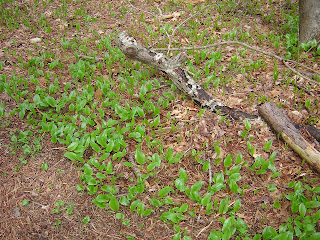 Posted by Mary Richmond at 8:14 AM No comments:

The Shadbush is Blooming! 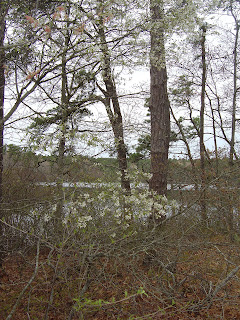 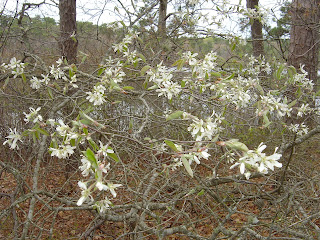 Almost every day a new sign of spring is bursting forth here on Cape Cod and this weekend the shadbush began to bloom almost everywhere. Shadbush is found mostly in fresh water wetland areas but can also be found around the edges of salt marshes in our area.
The bush is called this because it bloomed right at the same time another natural phenomenon happened in the spring and the Native Americans knew it to be a sign it was time to gather their gear for a special harvest after a long cold winter. A certain animal called a shad "runs" at this time of year. Do you know what kind of animal that is?
This shadbush was found at Hathaway's Pond in Hyannis but is in bloom Cape wide at this time.
Posted by Mary Richmond at 3:41 PM No comments: 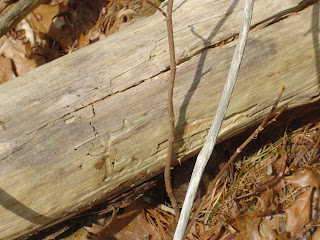 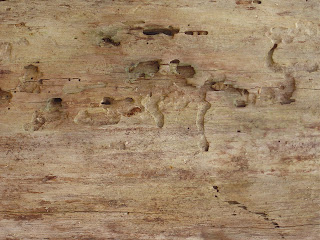 We often follow paths and trails but probably don't think too much about where they came from or why they are there. Most early human trails probably followed animal trails. Why? Animal trails would have sought the literal path of least resistance. Animals are all about conserving energy--their own energy!
By choosing a route that doesn't encounter a lot of resistance, whether it be large boulders, briars, holes in the ground, mud holes, etc. these natural paths often made good tracks, paths and eventually roads for people, too. Most animal trails would also eventually lead to water, too.
Not all trails are readily visible to our eyes, however.
These trails were made under the bark of the tree (when the tree still had bark) and have only been exposed after both the animal and the bark is gone. Do you know who the animal might be?
Posted by Mary Richmond at 11:38 AM No comments: