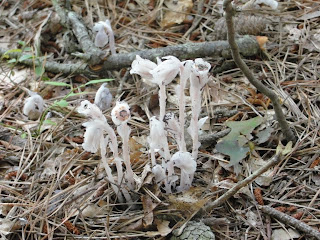 At this time of year many of our native wildflowers are blooming their last blooms but it is a great time to look for those little ghostly white plants called Indian pipes. They are fairly common in our piney woodlands and although they can be found blooming any time from June on it seems that September is their favorite time of year. On walks this week I found hundreds and hundreds of them.
Indian pipes look like a fungus because they have no chlorophyll but they are true plants nonetheless. Since they don't photosynthesize they must get their energy elsewhere. Their roots mingle with those of fungi, such as russula or bolete mushrooms whose roots are drawing energy from the roots of neighboring trees.
Don't pick these little flowers for they will just shrivel up and turn black, a fact that many find somewhat disturbing and which has given the plant a scary reputation with some people. One of its other names is corpse plant, probably because of this trait.
If you are walking in the woods after dark you might see these little guys glow a bit. They are really just reflecting light but its a pretty cool sight.
Posted by Mary Richmond at 9:18 AM