Have you been noticing a lot of robins around even though it is absolutely freezing and there is snow on the ground? Every winter for the last 20 or so years we have been seeing more and more robins from farther north coming down our way as the winter closes in. Robins will eat berries when worms aren't available and we have lots of berries here on the Cape, especially cedar berries. 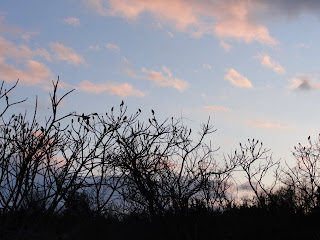 A few years ago the Christmas Bird Count listed thousands and thousands of robins in one location. Last year it was close to 100,000 birds. At dusk they fly in from all over. Some flocks are small, some are large and all are heading for the large stands of cedar where they will roost overnight. 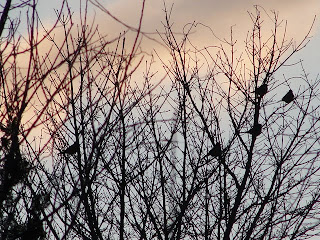 As the robins move in they settle into the trees around the edges of the woodland, even as hundreds more are flying overhead. I wish I could show you this. I took a video but it just looks like hundreds of black specks flying across the screen. 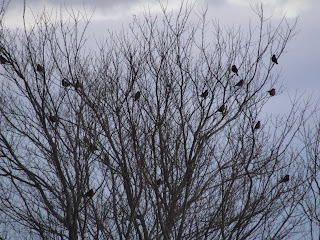 This is one of the groups. There are lots of predators, such as Cooper's hawks, around to take advantage of all this. We saw several hawks on the hunt and some of the people I was with say they have seen a merlin here as well. 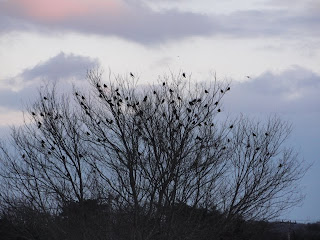 As the sun began to set in earnest more and more birds arrived. Those little black specks in the sky are all robins flying in.....really an awesome sight.
If you want to see the robins flying in to roost you need to be there about half an hour before sunset. They are in West Barnstable in the area around the West Barnstable Post Office, the railroad tracks, etc. You can also go around sun rise to see them as they leave for the day. We saw a large group settling in today in Hyannis where there is a lot of holly and cedar trees so you may see them just about anywhere during the day. These robins will hang around as long as there is food. They may travel a bit farther south in search of food but many will stay until late February or early March when they will return north. Our own spring robins, which are smaller, will return as these are leaving.
Posted by Mary Richmond at 8:43 AM