Winter Seals on the Beach

We were out in Chatham the other day and decided to take a walk on South Beach. The air was clear, it was relatively windless and warm, for winter anyway. We saw something shiny in the distance. From the shape and position I suspected it was a seal.... 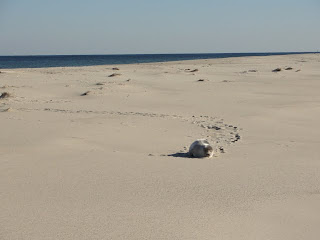 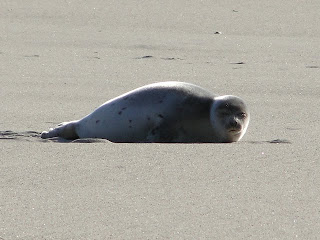 Seals often haul out onto a beach in the winter. Most are perfectly healthy and all should be left alone, according to the Marine Mammal Protection Act. These pictures were taken with a zoom lens and although there are what appear to be close ups I was well within the distance of 150 yards mandated by the law. 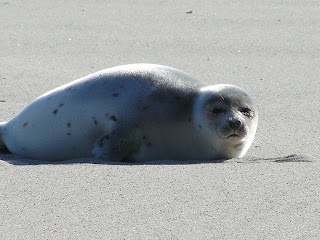 Seals look cute but they are wild animals and will give a nasty bite if approached by humans or dogs. Most seals you will see on the winter beaches are perfectly healthy and fine and need no intervention by humans. If you see a seal that is obviously in distress or injured you should contact the Cape Cod Stranding Network. Do not try to help the animal yourself. You may reach the stranding network by calling 508-743-9548. This number is manned 24 hours a day, 7 days a week. 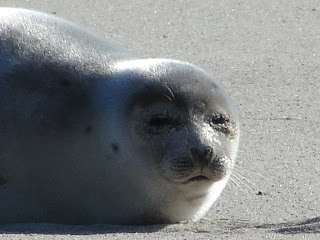 I believe this seal was a harbor seal. It had the heart shaped nose, was the right size and color and looks like a snub nosed cocker spaniel from the side, all visual indicators of harbor seals. In the summer our predominant seals are the gray seals but in the winter we get quite a few harbor seals as well as other rarer visitors such as harp seals. 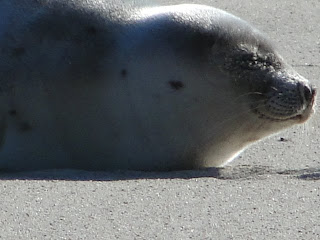 I love this shot because it looks like the seal is smiling and enjoying its day in the sun. Do seals smile? Scientists would probably frown upon the idea but for the rest of us....maybe they do. I know this seal made me smile....
Posted by Mary Richmond at 10:24 AM