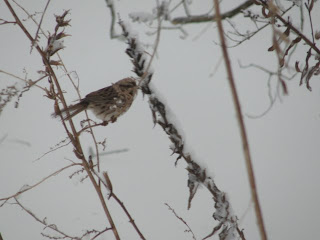 This little song sparrow arrived just after the snow storm blew out this week. The wind was still blowing and it was holding on to the weeds for dear life. You can see the movement of the tail as it tries to steady itself. 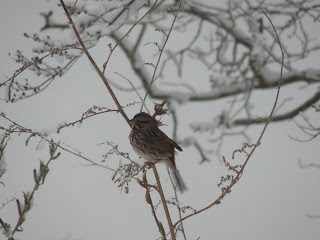 It finally had to give up and move but you can still see that little tail working away! Song sparrows are lovely little birds that are easy for children to learn to identify. They have a stripey front with a big dark spot in the middle of it which makes them look different from the other common sparrows we have on the Cape, such as the ubiquitous and non native house sparrows. Song sparrows often sit at the very top of bushes and in the spring are among the first birds to burst into song, other attributes that make them easy to identify.
Posted by Mary Richmond at 1:11 PM