Have you seen a wild turkey?

When I was a kid one of my favorite things to do on a long afternoon was play with my father's moose, duck and turkey calls. Hunters used these to trick moose, ducks and turkeys into coming closer, at least some hunters did. I personally think my father just like making funny noises.
Every fall he would go to Maine and New Hampshire with some old Army buddies to go hunting. To my knowledge my dad never shot anything on these trips but he always came home with lots of great stories of what he had seen. My mom said he just liked an excuse to go tromping around in the woods. Anyway.... 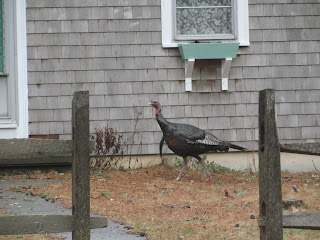 my dad would sure have been surprised to see wild turkeys running around everywhere on Cape Cod. Turkeys are now in every town on the Cape and have become a pretty common sight, even along the highways and in the down town areas. These birds used to be very rare. Even in places they were known to be they were hard to find and see. Turkeys were reintroduced in Massachusetts only about 20 or 25 years ago, I think and have certainly made a good come back. 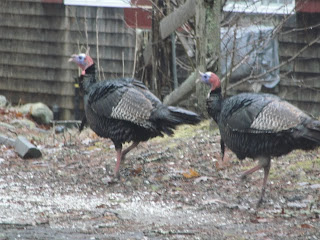 Turkeys travel in flocks and usually there is only one male with a whole harem of females. You may also see a bunch of young males hanging around together that don't have their own harems quite yet. 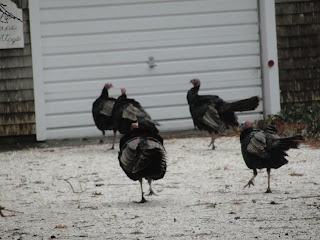 These turkeys were all raising their tails in the air while running down the driveway. I had stopped my car to take their picture out the window in the rain but they wanted nothing to do with me.....I found these turkeys in Eastham yesterday but you can see turkeys just about anywhere on the Cape.
Have you seen a wild turkey?
Posted by Mary Richmond at 4:09 PM