I know, you're thinking, huh? Handsome gulls? Yes. When they are in their full breeding plumage I think gulls are really handsome. And beautiful. This is a herring gull and if you've ever hung out watching them wolf down herring at the herring runs you know why they were given that name. 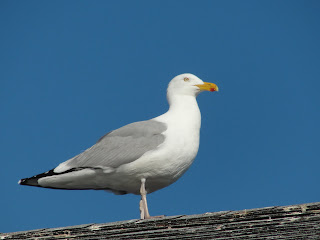 I don't believe there is a way to tell a male from a female unless you follow them around and see which one does what during mating and egg laying times. They both guard the nest and they both feed the chicks and protect them. They seem to know which is which and really, that is probably what is most important.

You may have noticed that there aren't many gulls around at area beaches right now. That is because they are nesting. Gulls are colonial nesters and nest in huge colonies, often numbering into the thousands. Here the biggest gull colonies are on the Monomoy Islands in Chatham. They often nest with greater black back gulls though usually the nests of each species are in separate parts of the location.

A gull colony is an interesting and often scary place. There is a lot of noise, a lot of stink and a lot of death. Gulls regurgitate food for their young and the little ones peck at that red spot on the bill to let mom or dad know they are hungry. Gull colonies are filled with guano, regurgitated fish and half eaten birds. Gulls will kill and eat each other's young so the nesting colony is often filled with angst and defense.

It isn't exactly a peaceful place and they are not fond of human trespassers either. My times in a colony were with people doing research and we had proper permissions from the state agencies that monitor such things. Let me just say that a big gull flying straight at you in an obvious aggressive move is pretty scary. I've seen really big men dive for the ground to avoid being pecked at. I found this short video of a gull and tern colony on YouTube that isn't exactly what it is like here but it gives you a good idea of the overall racket and commotion.
Posted by Mary Richmond at 11:34 AM