Rosa rugosa is best known as our common beach rose. It is found along salt marsh edges, around the feet of dunes and on the side of many beaches. It isn't native, though it is so pervasive it might seem to be. It originated in Asia and was brought here some time in the 1800's. There are many stories and speculations as to how it got here. Some say seeds were floating in dirty bilge water that was drained here. Others say a romantic sea captain brought a plant back for his wife who loved roses. Frankly, I'm sticking with the latter... 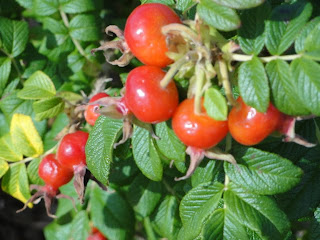 In any case, the fruits that grow after the flowers have died off are known as rose hips and the hips of the rosa rugosa are fat and juicy and full of vitamin C. Many people collect them and either make jelly with the ripe fruits or dry them to use in teas, etc. Many birds and animals also eat them. Sometimes confused with beach plums, rose hips are fat and red and beach plums are oblong and purplish.
I've included this pear because so many of our woodlands have grown up in old farm steads and old fruit trees can be found in most local woods. This pear was the last to be found from a little pear tree among the beeches and hickories of Sandwich. I'm sure it didn't last very long. 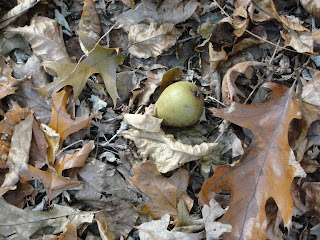 Posted by Mary Richmond at 8:24 AM