Do you put them up? Lots of people do but its a good thing to think about before you do. What birds are you hoping to attract? Lots of people want bluebirds but you can't just put up a bird house in the backyard and expect the bluebirds to arrive unless your backyard is a nice open field or salt marsh... 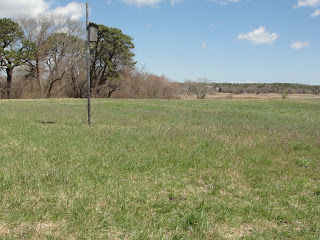 This is the kind of space a bluebird loves....but you may also get tree swallows, wrens, titmice, chickadees or....house sparrows! House sparrows, also called English sparrows are innocuous looking sparrows that are actually very aggressive non native birds that will actually take over other bird's nests in bird houses to claim them as their own...they will actually kill baby birds as well as the parent bird if they can. 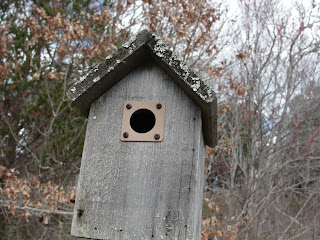 A good bird house will probably need a reinforcement around the hole. Some birds like to have a perch but many do not need them. 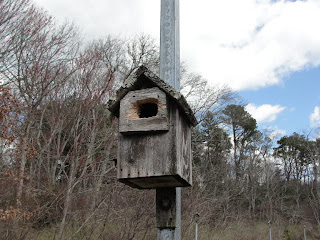 This is what may happen to a bird house without reinforcement. Larger birds such as starlings, other non native and aggressive nesters, will enlarge the hole and many mammals such as mice and squirrels will also gnaw on them. Squirrels will also attack nesting birds and mice will move into the nest boxes in the fall and often remain there all winter. More than a few human nest checkers have been unpleasantly surprised to find a whole boxful of mice tumbling down when they open the box to clean it out.... 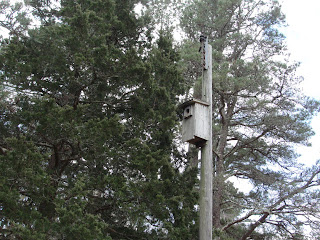 It is hard to tell from this photo but this box is much larger and was put up next to this tree to hopefully attract a screech owl. These boxes really do attract screech owls but they also attract squirrels.

If you are going to put up a nest box, please consider the type of bird you want to attract, the time of year, the location and so on. Many suburban bird lovers end up attracting the very birds that are harming the native bird population so doing homework is very worthwhile. Also, even though those houses with multiple holes look attractive in the garden, they only attract house sparrows. Many people remember when purple martins were plentiful and hope to attract them, but again, do a little research to see if they are even in your area.

There's a lot of great bird house and nest box information out there. Have some fun with it--kids love watching birds feed their babies. And maybe consider planting some of the trees and bushes birds like to nest in and leave that big old tree with woodpecker holes in it as a natural nesting lure.
Posted by Mary Richmond at 7:53 AM