We have several kinds of swallows on the Cape including tree swallows, barn swallows, bank swallows and rough winged swallows. Tree and barn swallows are by far the most common but the others can be locally common so depending on where you are you might actually be seeing more of them. I believe the largest group of bank swallows on the Cape is in Truro...We also have purple martins which look quite different, being darker and larger.. 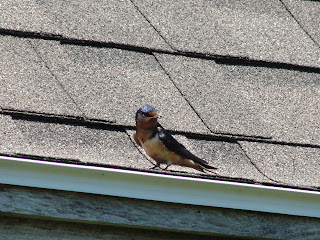 Barn swallows are among my favorites and have been every since I was a kid and they nested in our garage. They build nests with mud and saliva and often are found in colonies that can range in size from a few nests to hundreds. On the Cape they are found in any area with old buildings or open buildings, as long as there is an opening they can come in and out of. They also nest under docks and piers and can often be seen around local harbors. 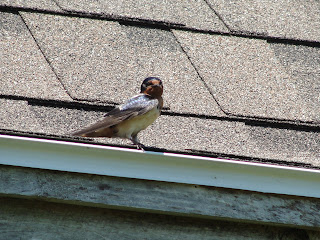 These two were resting after a busy time catching bugs and feeding the babies in the nests just inside the building. 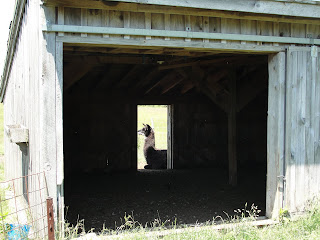 They could leave the babies knowing they were safe since Harley the llama was keeping watch....
Posted by Mary Richmond at 4:15 PM