If you've been to a beach on the Cape lately you have probably seen and heard terns. Lots of them. Terns are colonial nesters and gather in large groups to court, mate, nest and raise their young. They like sandy spots with some grass to afford good hiding spots and also like spots that tend to be a bit more isolated and surrounded by water. 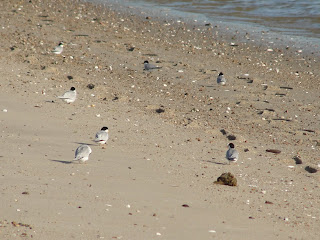 Tern colonies on the Cape tend to be pretty localized but they may also change from season to season. Kalmus Beach in Hyannis, Town Neck in Sandwich and South Monomoy all have sizable tern colonies. There are others, too, of course but these popped into my head first. 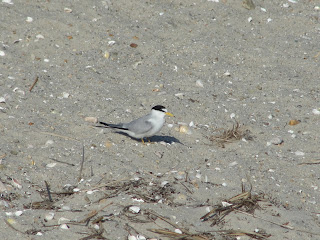 There are several types of tern that nest here including the tiny least tern shown above. Note the yellow bill. They are also quite small which is easy to tell when you see them mixed in with other terns such as the common tern. Roseate and arctic terns are rare breeders here but can be found in certain locations and in the late summer and early fall all bets are off for the Cape hosts huge flocks of mixed terns as they stage for migration and we never know what kinds of terns may show up then. 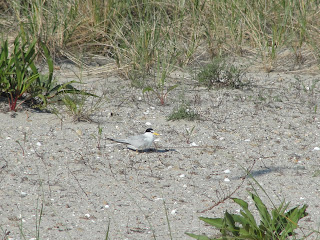 This last picture shows a typical nest area. Like the plovers, terns build very minimal nests that are really not much more than shallow scrapes in the sand.

Terns are easy to tell from gulls if you pay attention to just a few things. The terns we get here tend to be smaller than gulls but mostly they look slimmer, more aerodynamic and have long pointy wings. They can hover and dive as well, something you won't see a gull doing.

Because terns tend to hang out by the water's edge many people confuse them with sandpipers. Unlike sandpipers, however, terns do not run along the shore. They tend to be either resting, grooming or getting ready to lift off.

You can learn a lot more about terns by following this link to the Cornell Bird Website.
Posted by Mary Richmond at 8:02 AM