Just about everywhere on Cape Cod right now, including along many parts of the middle strip of Rt. 6, you may be seeing rambling bushes full of fluffy white flowers. Not to be confused with the leggier, taller and much less compact shad bush, these bushes are usually quite compact and just jammed with flowers. 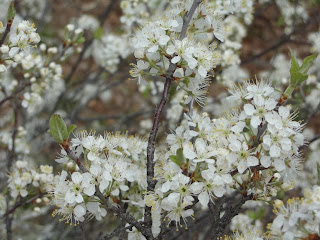 They almost look like cotton balls got stuck on them when you see them from the distance. 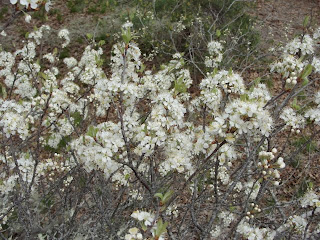 Beach plum is a hardy plant that seems to thrive in poor, sandy soil. They grow along the sides of marshes, woodlands, in shore side fields and even along the roadside. After the flowers fade they will set fruit and by August they will have tons of little ripe purple plums that usually end up in one of Cape Cod's favorite trademark jellies. That is if the birds, foxes and other animals don't eat them first.
The beach plum is often confused with the rosa rugosa or beach rose because of the big orange red fruits that set after the roses bloom. Those, however, are rose hips and that's a whole other story.
Posted by Mary Richmond at 6:08 AM