At the Wellfleet Bay Wildlife Sanctuary there is a small army of volunteers that monitors the nests of the diamondback terrapins both on the sanctuary and nearby. These blue flags and exclosures all signify confirmed terrapin nest. 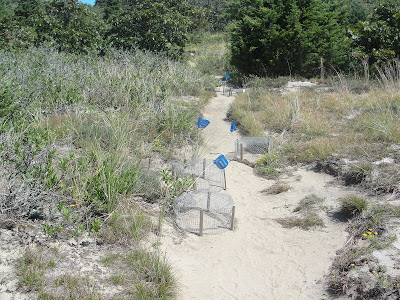 Over the past few days the tiny terrapins have begun to hatch. Some are brought into the sanctuary to be weighed and measured and recorded in all ways possible. 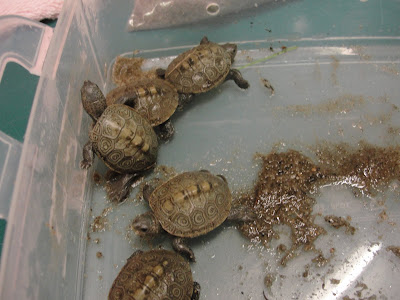 I was lucky enough to get to see some that had just been brought in when I was visiting the sanctuary yesterday. 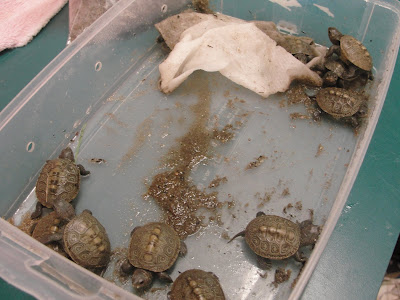 Each of these little guys is about the size of a quarter but they are so perfectly formed and marked there is not doubt they are diamondback terrapins. I see them each year and each year I marvel at their perfection. 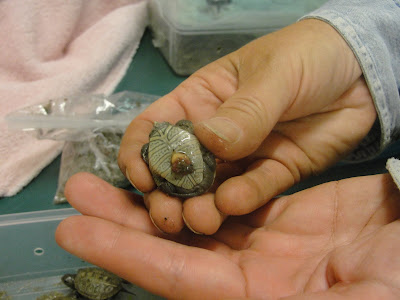 This last photo not only gives you some scale but also shows the remaining egg sac on the underside of the shell. Once those fall off or are absorbed they will release the hatchlings. The yolk has an odor that the predators of the turtles are very well attuned to so giving them a day or two to become less of a snack is a good thing for the turtles.
Posted by Mary Richmond at 10:21 AM