These are my Hyannis ospreys. I refer to them as mine because, well, they hang out at my beach. You know, the one I have walked on every day since I was a kid. Okay, so it really isn't my beach in the true possessive sense but over the years I've gotten to know this beach pretty well.....and yes, I often think of it as mine, especially in the off season months when I often have it all to myself. 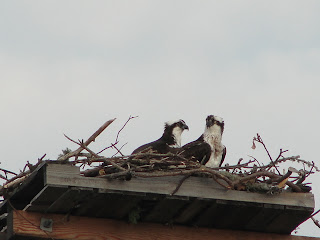 Over the years ospreys have been in the neighborhood but have never successfully nested here. In fact, there were several unfortunate nesting attempts that ended badly due to, shall we say, electrical complications....The power company has now added a safe platform for the birds and although they attempted nesting here last year it was not successful. This year, the pair has been actively adding to the nest and has been seen copulating so we are hoping there will be eggs soon. 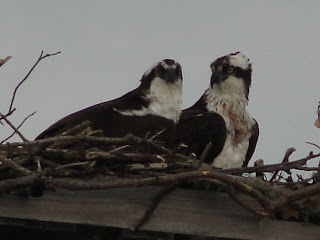 The female has a bit of a brown necklace which you can see pretty well here. Often the male will be on a pole or even on the ground nearby keeping watch when he isn't hunting or bringing his mate her breakfast or dinner. Both can sit on the eggs and both will feed the young but for the most part it is the female that will brood the eggs. 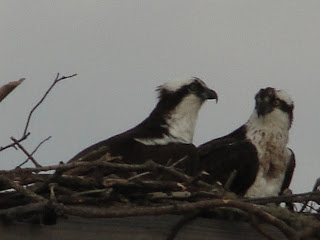 This nest is very exposed but I am hoping they will be able to withstand the winds and rains of the season and be able to raise their family. After all, they will soon be my babies as well and I will worry about them ;-)

To be honest, I am actually part of a group monitoring osprey nests this year so I will be keeping very close tabs on this nest for scientific reasons as well as foster parental ones.
Posted by Mary Richmond at 8:29 AM