We live in an almost urban area and our plot of land is less than a fifth of an acre. We sit on a corner so have streets on two sides and also houses to the back and the other side as well as across the street. It is an old neighborhood so there are lots of trees and flowers and lots of wonderful neighbors. There is a surprising amount of wildlife. 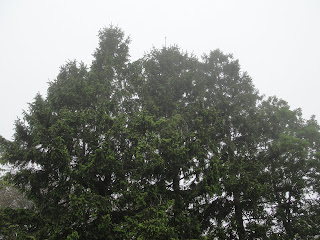 Behind the house is a stand of 3 Norway spruces that are quite tall. The one on the left suffered a blow from Hurricane Bob years ago and lost its top half. As you can see, it is now taller than the other two. The middle tree is the one I'd like you to look at. See that spikey point way up top? It is the favorite singing spot of all the birds in my neighborhood each spring. There are robins, cardinals, orioles, grackles, crows, blue jays and others that take turns singing away from here as loudly as they can. This morning we had a great crested flycatcher up there raising a ruckus for about half an hour before he left to chase a competitor. 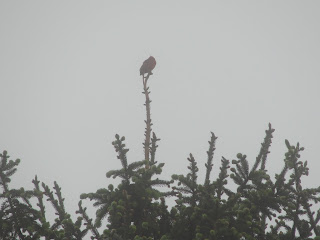 No worries. Mr. Cardinal took right over. Who knew such a humble perch would play such an important role in local bird dynamics? Do you have a spot in your yard that the birds use to declare their intentions?

And yes, that is fog you see....we've been having foggy days while the north side and west have been enjoying lots of sunshine...ah, the joys of living up the street from Nantucket Sound. That's okay, later in the season that same proximity will keep us cooler with daily afternoon sea breezes....

Have a great holiday weekend, everyone!
Posted by Mary Richmond at 2:16 PM