The shadbush is in bloom! 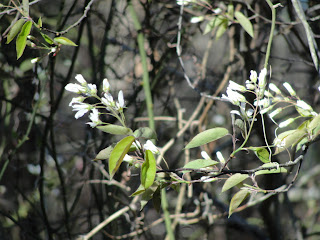 Also called June berry or serviceberry, this bush can be found along many of our fresh water and marsh areas and is one of our first native wild bushes to bloom. Called shadbush by the Native Americans, it signaled when the shad, a type of herring was running. This would have been very happy news for it meant fresh fish would soon be on the table after a long winter of smoked or dried fish. The name serviceberry comes a little later from the fact that when this bush bloomed those colonists who had passed away in winter could now be buried and a service held since the ground would no longer be frozen...
Posted by Mary Richmond at 5:06 PM