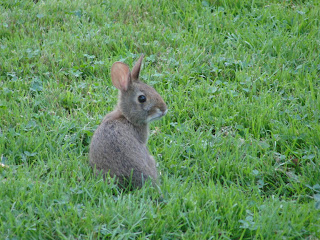 Rabbits are not rodents, contrary to popular belief, but belong to a group called lagomorphs. They have the unusual habit, necessary to their survival, of eating their food, partially digesting it, pooping it out and eating it again to fully digest it. This separates them from other mammals that seem similar. Seems a little strange to us but for the rabbits it is perfectly normal. They eat mostly grass and flowers so their scat is a little different and much less off putting than that of a carnivore or even an omnivore. 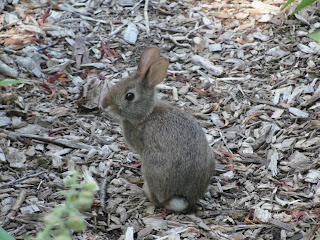 This little guy is showing his white tail, the reason it is called a cottontail. As you probably know, rabbits tend to be more or less silent unless mortally afraid. They warn of danger by stamping their big back feet and flashing that white tail as they run to avoid and escape their predators.

Wild rabbits don't live very long, being a favored prey of many mammals and birds. This is probably one reason they are so famous for their reproductive abilities.

Mass Audubon has done a great job of putting together more information about the eastern cottontail rabbit and you can read it by clicking on the link.
Posted by Mary Richmond at 8:08 AM