Yesterday I was lucky enough to spot a horned lark foraging in the dune grass. There may have been more than one but this was the only one I saw. I followed it as it made its way down the beach. It occasionally stopped to sing. Once you've heard a horned lark sing you know why they are called larks. Their song is quiet but very sweet. 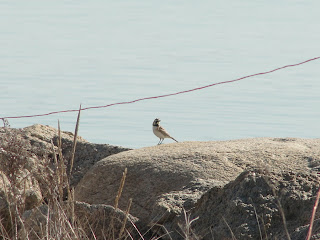 Horned larks look as if they have tiny horns on their heads but they are really feather tufts, not horns. 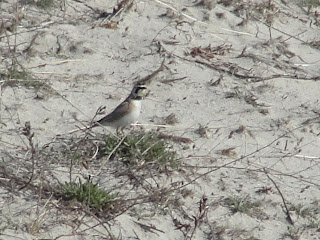 Here on the Cape they are often found by the dunes or on beaches that have good grass or plant cover. They are seed eaters so these places are especially attractive to them in the off seasons. They are the only true lark in North America by the way, and often called shore larks overseas, a name that fits them here on the Cape as well, in my opinion. 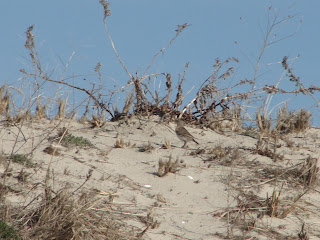 These birds are very well camouflaged as you can see from this picture. If you can't see him, he is almost smack in the center of the photograph.

This bird was photographed by me at Kalmus Beach in Hyannis yesterday. They can be found on many Cape beaches, in fields and meadows, along marsh edges and other such areas.
Posted by Mary Richmond at 6:56 AM